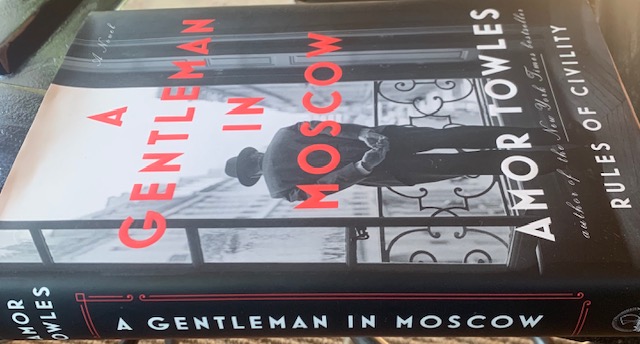 The first time I read A Gentleman in Moscow was for a real book club. I absolutely adored it on my first read, and I had been very attentive, knowing that I would be discussing it with some very smart women in a few short weeks. I had really enjoyed Amor Towles first novel, Rules of Civility, although it had a somewhat chilly tone, and found A Gentleman in Moscow to be a much warmer and even more satisfying a read.

On the first, and even the second and third readings of this novel, I felt quite smug and smart. I’d noticed that all the chapters begin with words that begin with the letter A, as do two of the main characters, Alexander and Anna, as well as the author, Amor. None of my fellow very smart book clubbers had noticed this, which Amazed and Amused me, but since my own name begins with an A, I tend to notice A words more than some.

I got all the literary and most of the historical and cultural references in the book. Odysseys, Shakespeare, Tolstoy, Doestoyevsky, the Nutcracker… For example, the one-eyed cat that lives in the Metropol hotel where protagonist C0unt Alexander Rostov is sentenced to house arrest is named Drosselmeyer, for a one-eyed character in the Nutcracker. It made me feel educated and intelligent to recognize the allusions, but on the fourth reading I sort of saw through a tear in the veil of Towle’s literary devices. On first reading I felt as though the author simply assumed the reader was a gentleman or lady and so carries him or her along with the story of this particularly erudite and charismatic count.

But finally on the latest reading I feel a bit duped. These allusions are too easy. Most are to works of literature that anyone in America or England who graduated high school or took a year of college English would be familiar with. I now think that Towles doesn’t assume his reader is of a certain class and education so much as want to make the reader feel he is a peer of the count. He doesn’t want us to veer toward the cynicism and jealousy of the antagonistic character, the Bishop, who resents the count for his life of privilege and the fact that good fortune and happiness seem to come so easily to him.

The story is a quick read and very satisfying. The relationships, between the count and other characters: his love interest, his rebel friend, his adopted daughter, his colleagues in the hotel, his enemy the Bishop and others, are well-developed, if not exactly realistic. Would a beautiful, famous actress really fall for an older man under house arrest? Would a man really bunk with a girl in a small bedroom until she was almost 18? Would an American spy really befriend a Russian Former Person and eventually help his adopted daughter defect? It doesn’t really matter because the story is absorbing and a wonderful, aspirational fantasy.

In fact, it was a great book to read during the shelter in place ordnance of March and April 2020. One of the things that myself and most of my friends and colleagues were trying to do during this unexpected break was to use our time as wisely as possible. We used the opportunity to deep clean, repair, organize, plant gardens and raise chickens. We wrote letters and read books and spent time with family and called–real phone calls–friends.

Count Rostov, under house arrest, makes the most of his time and restricted space. He declutters. He gets creative in a small space, for example, when Sofia, who becomes like a daughter, moves in, he created bunkbeds by stacking large cans of pureed tomatoes as bedposts and putting her mattress on top. He also adopts and adapts hidden spaces. He discovers a room next door to his bedroom, which he accesses through his closet and makes his own. The hotel becomes a magical world, and being a destination hotel in an exciting city, the outside world comes to Rostov.

Our home has become our Metropol and the world comes to us through the internet, so we have access to all kinds of information and need to be vigilant filters if we want to have the Rostov experience. Like Count Rostov, we have also been looking at our homes in new ways and, desperate for more space, have adapted under-utilized garages and guest rooms into home gyms or offices. Like Rostov, people have taken careful stock of mental and material assets and gotten creative with getting the most out of our finite resources. Like Rostov, we are doing squats, pushups in our rooms and taking the stairs to stay in shape.

It’s refreshing to be forced to remember how wonderfully simple life can be and how plastic and resilient the human brain. Yes, there are a lot of people zoning out on TikTok videos. But people who liked A Gentleman in Moscow or somehow found this blog are more likely to have picked up a volume of War and Peace and used this opportunity to actually finish it.