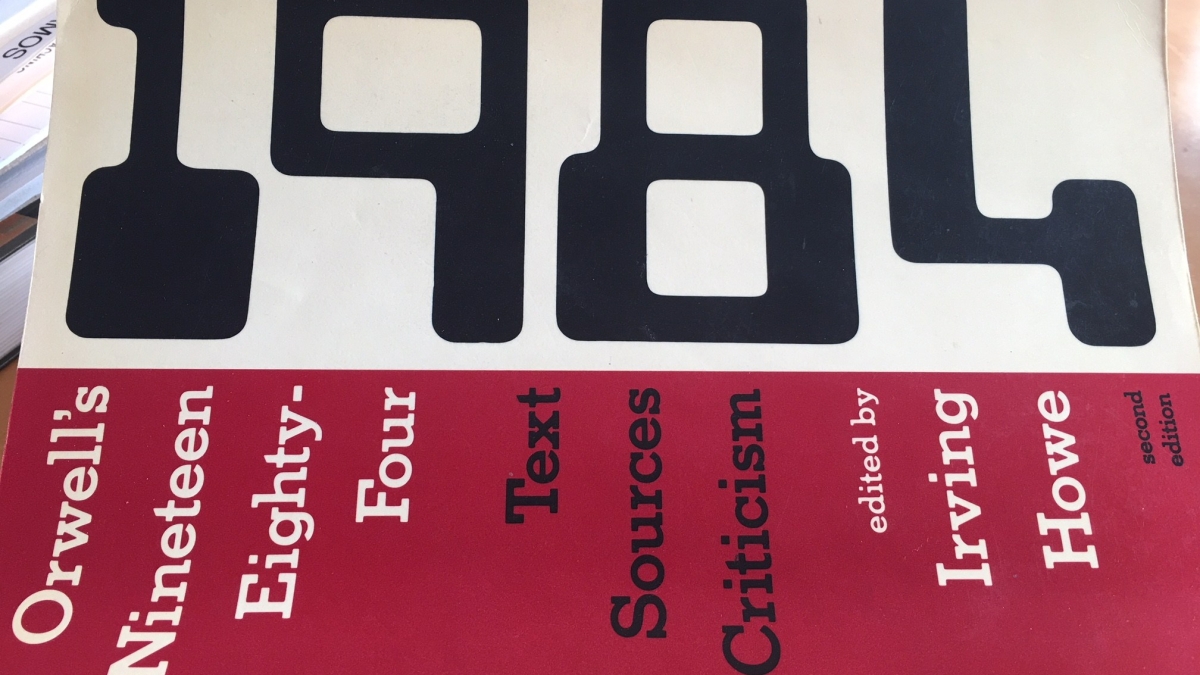 The 80s are back and I can hardly believe it. There is a female editor (again, post Tina) at Vanity Fair, ridiculous volume in clothing, and a familiar new wave sound on the Sirius XMU channel, and they are giving me flashbacks. I never thought I’d worry about shoulder pads and nuclear war again, but here we are. Big Brother is one thing, but the return of Big Hair would be a real tragedy.

The news of the day, with themes of surveillance, white nationalism and American exceptionalism make it a perfect time to revisit George Orwell’s 1984. I sure hope they are still reading it in high school, although from the sound of the Parkland student speeches and youthful activism of the moment, maybe they don’t need to. 1984 made me quake in my jelly sandals in the 80s;  I’m glad to see the kids of 2018 have the courage to speak truth to power.

Big Bad Voodoo Daddy Russia is making a returning appearance as enemy #1 and North Korea featuring Rocket Man is filling the enemy #2 slot (sorry Middle East, distant third this year). War and the threat of war can distract us proles from anything, as Orwell points out many times in the book. Like Orwell’s Eastasia and Eurasia, the enemy may change but the situation–at war, in fear–stays the same.

The characters in the book, including protagonist Winston Smith and his lover Julia, are watched constantly by telescreens–a sort of two-way television that cannot be switched off. Children are taught to betray their parents for crimes–even thoughts–that are against the ruling Party. Orwell predicted a very grey and bleak world, much more Communist than what has actually come into existence, but the similarities are still eerie.

Fake News, for example, is a phenomenon that anyone who’s read 1984 can hardly believe is a “thing.” You mean, facts are now questioned? Whodda thunk it. We should have been prepared, but we gave the first fake news purveyors a pass because they were  religions.

The religious right got the “facts can be questioned” ball rolling with creationism versus evolution and their demands that creationism be given equal time in school. Science, which most of us always thought of as neutral, is now considered by the right to be politically liberal. They’ve added “science elite” to media and Hollywood.

From there it’s been easy for Donald Trump and people like him to discredit facts as “fake news” and lie over and over again from a bully pulpit with no repercussions. The Donald’s fans soak it in, just as the comrades in 1984 accept whatever current “facts” the Party spits out.

The perversion of the sex instinct is another way the Party controls its population. But where Orwell’s dystopia considers sex a “duty to the Party” to procreate and reveres chastity otherwise, hetero sexuality in America has been exploited to the nth degree. The sexual ideal of a hetero woman has been made so artificial and tawdry (Barbie come to life boob inflation, shave ‘n’ grab pussies), that intelligent, natural women hardly care to compete, er, participate.

The edition of 1984 that I own is from a college course. It includes fragments of letters Orwell wrote to colleagues while writing 1984, reviews of the book at the time of its publication in 1948 and some critical essays. I hadn’t read most of them and honestly, still have not read each of them with total care (ok, I skimmed them), but I did gain some insights and new perspectives from the appendices on this dystopian classic.

In editor Irving Howe’s essay, “The Fiction of Anti-Utopia,” he nails perfectly the reasons for the emotional malaise I’ve been enduring since Trump was elected. He uses the word “disenchantment.” I can now completely empathize with the Flower Children of the 60s and the Hippies of the 70s who must have felt tremendous disenchantment and depression when Nixon was elected. The other phrase that struck me was one Howe quoted from Max Eastman: “the doom of the true values of life.” Nature may be my last true value. I saw kids playing in a ditch the other day and tears came to my eyes. So it is possible to lure them away from their screens!

One of the reviews of 1984,  Julian Symons’  George Orwell’s Utopia, brought into relief for me an unconscious issue I have with the book. I could never visualize the Room 101 scene and found the idea of Room 101 unbelievable. Symons calls the scene “comic.” Now that he mentions it…

Samuel Sillen’s “Maggot-of-the-Month essay is the only entirely negative review reprinted in this edition. His main issue with 1984 is that its theme is “people are no damn good” and “life is a dunghill.” I’m struggling against a Trump-era news fascination, and, if the news is any indication, I have to side with Orwell. The people who are making most of the decisions for the future of the Earth are no damn good and the rest of us are too lazy, scared and depressed to be activists.

In the middle of the grey dunghill Orwell presents in 1984 are moments of great beauty and poignancy. The antique journal and the glass paperweight with the bit of coral in it that Winston purchases at the junk shop are intimately described. I could feel the creamy ivory paper of the journal. I got lost in the watery depths of the paperweight. As Winston clung to these items for hope and a bit of beauty in a dreary life, so did I as a reader.

The most difficult, truest section of the book for me was the description of Winston as a young, selfish child. With his father “disappeared,” his mother did her saintly best to love and care for her children, but all three were starving, At one point she brings a shoots and ladders-type board game home, salvaged from the trash. At first the boy pouts, thinking the game a piece of crap. His mother persists in playing and bit by bit he is lured into joining her until finally the three of them are engaged in the game and laughing. The scene gave me such a jolt of recognition that I started crying (I told you I’m depressed!).

The point at which Winston recognizes that his infant sister is dying doesn’t stop him from stealing her bit of chocolate and running away. I’ve never been a mother but I felt that (lightly sketched) character’s deep sadness and desperation. What I have been is a selfish child and these passages stabbed me in the heart. I’m going to pop a Wellbutrin, Brave New World soma-style, and carry on to the next Selfish Book Club selection.